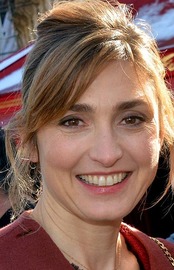 Julie Gayet is a French actress and film producer. She is also known for being the partner of the former President of the French Republic, François Hollande. Wikipedia